Our third quarter performance is indicative of where we stand on our major magnetics development programs, along with solid performance on our repeat production orders. One design has completed qualification, and had both test and production units delivered to our customers. The other two designs are complete, with units delivered to US Navy test facilities after extensive in-house testing. Qualification on these two designs will start in Q4, with the first production deliveries of our new 3.8 MW transformer planned before the end of fiscal year 2019.

We anticipated that fiscal year 2019 would be back-end loaded, with strong revenues and new sales orders anticipated during the final quarter of the year. We believe that the majority of new orders in the fourth quarter will come from our new products as they transition to low-rate initial production, consistent with our growth strategy implemented over the past several years. The new orders, if realized, will enable us to start Fiscal Year 2020 with a robust backlog.

Espey’s primary business is the development, design, and production of specialized military and industrial power supplies/transformers. The Company can be found on the Internet at www.espey.com.

Fiscal year 2018 continues to be strong in all areas.  Revenue, income and new orders exceed same-period numbers for fiscal year 2017 significantly.  We have been executing well to our strategy.  Our manufacturing facility and engineering resources are fully engaged in executing on our current backlog of business.  We continue to have important milestones to meet on large engineering development contracts and are making good progress on those efforts. The Plant improvements are going well and we continue to balance investments for future growth with our desire to maintain and increase return to our shareholders. All things considered we had a very good quarter.

Saratoga Springs, NY; December 4, 2017 – The Board of Directors of Espey Mfg. & Electronics Corp. (NYSE MKT: ESP) has declared a regular quarterly dividend of $0.25 per share. The dividend will be payable on December 28, 2017 to all shareholders of record on December 18, 2017.

The MAC-500 is a versatile power inverter with the capability to convert 24/28V DC input to 120V AC with 60Hz True Sine Wave output. The convenience outlet is typically used for laptops, IPODS, Cell Phone or any device needing 120V AC input.

The MAC-500 can be modified for any type installation and configured with any type input or output connector which makes it one of the world’s most adaptable 24/28V DC to 120V AC power inverter. The MAC-500 has been designed for rugged and harsh conditions; it is both water resistant and dust proof. Suitable applications are Transit Rail, Off Highway Vehicles, Construction Vehicles, Service Vehicles, Military Ground Vehicles and Marine applications. Although designed with these punishing environments in mind the MAC-500 can be used for any application requiring 120V AC power with a 24/28 V DC input. For more information please go to MAC-500. 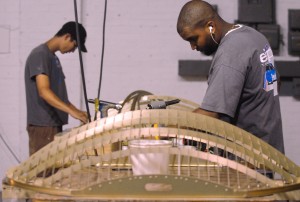 SARATOGA SPRINGS – One hundred and seventy people are busy at work inside the gated compound on Ballston Avenue where secret work has been going on for the past 50 years.

Espey is an electronics manufacturer specializing in power-related devices. But about 80 percent of the company’s nearly $30 million in annual contracting work is conducted for the military.

We’re much more than that big gray building on the corner in a resort town, St. Pierre said. We’re doing defense work and valuable work for the nation. Our devices end up in radars and radios and all kinds of communication gear.

We’re the people behind the scenes from a power point-of-view, St. Pierre said. We deliver power solutions enabling all these fancy technologies to work.

Inside the 150,000+-square-foot facility, the company conducts work on systems that will be used by the military on land, on sea and in the air. The systems are installed on everything from nuclear submarines to surface ships, including fixed-wing aircraft, helicopters and wheeled vehicles.

These things have been around, but they become digitized, or made electronic. That’s where we come in. We can take an old howitzer and make it extremely accurate by putting a digital fire control system on it. It’s a system that electronically tells the gunner, or the forward spotter: This is the weather. This is the air density. This is the altitude. This is the angle and azimuth you should use. You can drop that shell in the living room of an insurgent hiding in Afghanistan, he said.

Testing such technology is not cheap. St. Pierre estimated it costs the plant about $250,000 a year in electricity bills alone.

And from a contractor’s standpoint, St. Pierre said he believes Espey is somewhat protected from proposed Defense Department budget cuts because of the type of work the firm does.

You always have to be concerned, but we’re positioned well. I really think we’re going to be immune to those kind of cuts, said St. Pierre, who was named Espey’s president last year.

Things that are in communications and radar generally don’t get cut very often. Ground vehicles, which are essential to the Army’s modernization program” as well as the upgrading and modernization of existing ships ”we’re on those, which I think immunizes us against wholesale cuts, he said. More power consumption means more opportunity for companies like Espey.

I’ve been proud to work with them as they’ve helped to make our local economy strong and our country safe, Murphy said.

Compared with places like GlobalFoundries, which is expected to create specialized computer chip manufacturing jobs after it opens in 2012 in Malta’s Luther Forest Technology Campus, St. Pierre said the 170 workers he employs range from high school graduates who are taught to assemble electronic components to employees who have earned doctorates.

St. Pierre said 20 percent of the work at Espey involves high-end commercial work, such as making the equipment that can manage power systems for locomotives. The bulk of the company’s work, however, continues to be for the military.

About 80 percent of what we do is military, most of which comes from federal funding, one way or another, St. Pierre said.

Although we sell a little bit directly to governments” including the U.S. government and foreign governments, under license” most of what we sell is as a subcontractor, and that number is ultimately funded, indirectly, by the federal government, he said.It might go through companies like Lockheed-Martin, or Raytheon, or General Dynamics, but the contracts are typically government contracts paid for by the taxpayer.