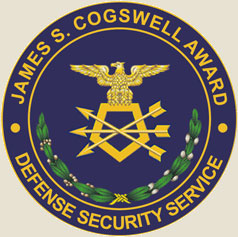 Saratoga Springs, NY, June 14, 2005- Espey Mfg. & Electronics Corp. is proud to announce its selection as a recipient of one of the 2005 James S. Cogswell Outstanding Industrial Security Achievement Awards by the Defense Security Service (DSS). The award was accepted at the National Classification Management Society (NCMS) Annual Seminar held in Seattle, Washington on June 7, 2005, by Peggy A. Murphy, Director of Human Resources, Facility Security Officer, and Corporate Secretary.

The Cogswell award, established in 1966, is named in honor of the late Colonel James S. Cogswell, USAF, who was the first chief of the unified office of Industrial Security. Annually, DSS presents this prestigious award to only a select group of defense contractors. The criteria focuses on principles of industrial security excellence, which include establishing and maintaining a security program that goes well beyond the basic National Industrial Security Program requirements; and providing leadership to other cleared facilities in setting exacting and high standards for security. There were 11 facilities selected this year, less than one tenth of one percent, of the eligible 11,000 cleared contractors. Additional information and the full story can be found on the web at http://www.dss.mil.